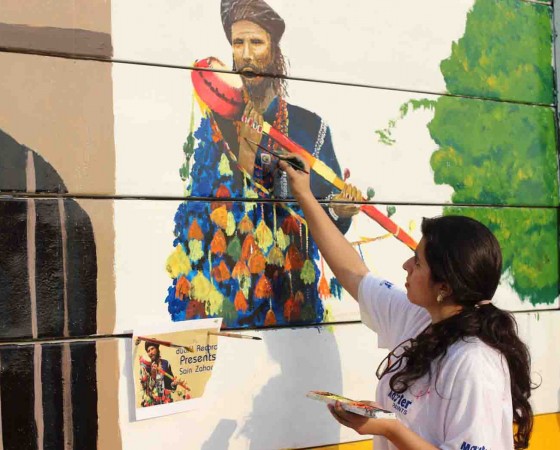 With a passion to bring their work to the masses, hundreds of participants of the Street Art Competition 2018 began painting the walls of Maulana Shaukat Ali Road for a third and last consecutive Sunday.

The competition organised by Artistan seeks to promote a healthy activity among art lovers and discourage wall-chalking on the roadsides of the country.

Talking to The Express Tribune, Founder and CEO Artistan Mudassir Zia said that in Pakistan, access to art had been restricted to a select few and the masses could not see works of art anymore.

He said that the idea of Street Art Competition was to bring together artists and make the cities of the country beautiful. He said that elite universities and institutions should encourage their students to participate in such events instead of restricting them.

The Street Art Competition 2018 was started as an annual competition since 2010 and Sunday was the last part of the competition this year. Around 400 participants from 80 teams competed on the last day of the event and the winners will be announced on April 8.

The competition carries eight prizes. First place will be given a cash prize of Rs100,000, second will have Rs60,000 and the team in the third place will receive Rs40,000.

Painting a mural of flute players with her team, Aiman Khokhar from the Lahore College for Women University (LCWU) said that their work was inspired by Risalo, a puppet film which features the work of renowned Sufi poet Shah Abdul Latif Bhittai. “It is very unfortunate that people in Pakistan don’t know about the works of Bhittai. We want to highlight his poetry that draws attention to and focuses on realism and deep thought.”