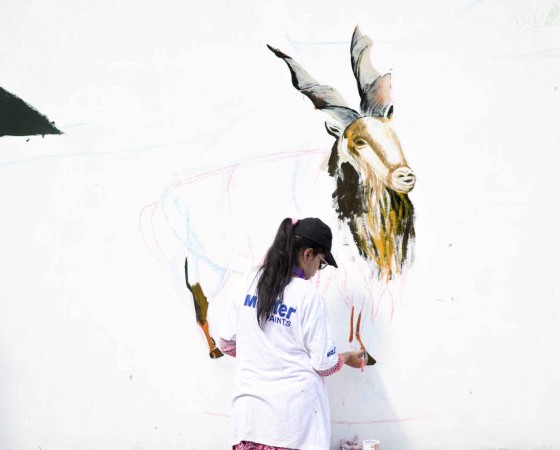 Artisans, students and people with a knack for art came together to paint murals on the outer walls of the Punjab University and painted the empty walls with beautiful exhibits of their artwork.

The artists came together on Sunday at the Maulana Shaukat Ali Road for the Street Art Competition 2018 organised by Artisan, a social enterprise working to promote the arts and traditions in society. The competition also carries prizes for the winners to be decided after the end of this year’s competition.

A total of 450 artists participated on Sunday in 94 teams painting different sceneries on the white outer walls of the university. The participants painted different notable personalities as well as sceneries depicting different cultural and visual aspects of Pakistan. The competition will continue till next Sunday with more artists competing for the prizes.

Speaking to The Express Tribune, Artisan’s Founder and CEO Mudassir Zia said the Street Art Competition was an anti-wall chalking campaign. He said Artisan had organised the competition in different regions of the country that include Punjab, Sindh, Khyber Pakhtunkhawa, Balochistan and Gilgit-Baltistan. “Moreover,” he said, “the competition had been organised in 21 cities of Punjab alone,” Zia said.

“The activity promotes arts among students and the reason it is held on a weekend – Sunday, is to engage as many students as possible, though the activity has not been limited to students as anyone can participate,” he said. “The activity also helped bring art to the common man of Pakistan, as most of the population did not have access to art galleries. The Street Art Competition was started in 2010 and had been held since then regularly.”

He said around 600 metres of the wall was being painted today (Sunday) and the final part of the current year’s competition would be held on Sunday, March 25. “The paint and other equipment for the participants were provided by the sponsor of the event. The competition carries a total of 10 prizes for consecutive position worth a total of Rs300,000. The first prize is of Rs100,000, the second for Rs60,000 and the third for Rs40,000,” Zia said.

Painting a mural of Nusrat Fateh Ali Khan, Tooba Malik, a participant along with her team members Saira Bibi and Arfa Azeem, from Rawalpindi and Sialkot respectively, said they chose to paint Nusrat because of his iconic personality as well as his international stature. She said they wanted to showcase the colours of Pakistan with their work. “We also want to end the ugly wall chalking prevalent in the country and will rather see beautiful works of art,” she added.