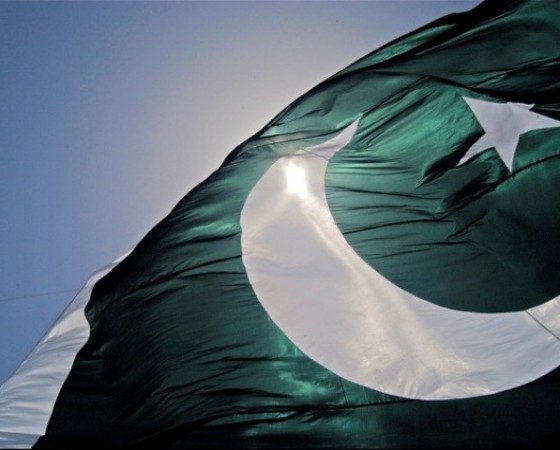 As many as 1,300 youths painted a 41, 685.5 square feet canvas in an attempt to set a new world record for the largest painting.

The painting, which consumed 3,500 litres of paint, was painted at the National Hockey Stadium on Friday.

The participants had lined up in the grounds next to the hockey stadium at 8am. They were divided into 260 teams.

According to the event management team, the Facebook page for the event had more than 19,000 likes within 6 hours of its launch.

By 4pm the painting was completed. Dr Neelam Naz, head of the architecture department at the University of Engineering and Technology then measured it for the record.

Sharood Zafar, who volunteered for the management team, said that each of the teams had been assigned a portion of the canvas to paint on.

The teams had also been provided with the images to paint, a night before the event, she said.

Zafar, a human resource professional, said that the layout for the painting, a mosaic patterned after the Pakistan flag, had been finalised earlier by the coordination team of the Message Welfare Trust, the organisers of the event.

The concept originated with Mudassir Zia, a mechanical engineer from the University of Engineering and Technology. Zia had earlier participated in a street art competition where more than 500 walls of the city were painted.  Speaking with The Express Tribune, Zia said he was overwhelmed by the eagerness of the people participating in the event. “We have done our bit, let’s hope the Guinness authorities acknowledge this effort,” he said.

“We already know what the youth of Pakistan are capable of – this is just another example of what they can do,” said Farrukh Sufi, technical director of Master Paints, the main sponsor of the event.

Sufi said that the event came in after three years of work with the Message Welfare Trust on beautifying the walls in Lahore.

He said the company hoped to take the painting to all the major cities of the country. The sponsors who provided participants with a paint kit each and refreshments and arranged for video coverage of the event, hope initiatives on an even larger scale will follow.

Mehwish Mehr, another participant took part in the event along with her two sisters. Mehr painted a rocket “symbolising Dr Abdul Qadeer Khan’s contribution” to the country’s defence productions. She said she was confident the event would be a success. “I am sure we will set a new record today.”

The participants attempted to set a new record of completing the painting in 5 hours and 40 minutes.

Guinness certification rules require at least two independent witnesses throughout the duration of the event.

One of them was Aqsa Malik, a lecturer of the Fine Arts Department at Punjab University.

Towards the end of the event, Senator Pervez Rashid visited the National Hockey stadium. “This is the true picture of Pakistan,” he said.

The painting was photographed from the air once it was finished. The results have been sent to the Guinness World Records. The organisers expect a response within a month.