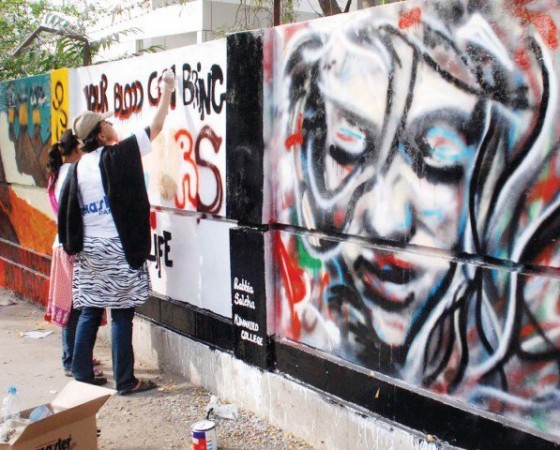 LAHORE – The annual street art competition currently in its 3rd year has initiated across the vibrant city of Lahore. An initiative by Message Welfare Trust and supported by Pakistan’s leading paint company Master Paints since 2011, this year’s competition has attracted a massive response with participation from over 400 teams from schools, universities and colleges all across Punjab, says a Press release.
Starting from the 4th of March, the series takes place every Sunday at different localities across Lahore till 23rd March, on Pakistan Day where the top 200 teams from the competition will be given a chance to make history and do Pakistan proud by attempting to set a new Guinness World Record for the ‘largest painting’ in one day ever achieved. The organizers will be looking to fill a canvas size of approximately 40,000 square feet on the day based on the theme of Pakistan, its culture and its youth.
Speaking from Abbott & Edgerton Road on Sunday (March 4) where the first series took place, Master Paints CFO, Kashif Shahzad said, “For majority, the “Street Art Competition” is an anti wall chalking campaign that teaches people to keep the city walls clean. For us at Master Paints, it’s a vision for a better future!”
Currently the Guinness World Record for largest painting set on 17th November 2010 at Lagos State, Nigeria measures at 33,696 square feet approximately.
Praising the effort by Message Welfare Trust, Master Paints CEO, Sufi Mohammad Amin said, “We have always believed in giving back to our community which is why we support initiatives such as “Street Art Competition”, and what better way to send a positive message to the world on Pakistan Day than making an attempt to set a new Guinness World Record. We will be telecasting the event live on our official facebook page.”
President of Message Welfare Trust (MWT), Mudassar Zia said, “A picture says a thousand words, and we really appreciate our sponsors, Master Paints.”
The Street Art Competition 2012 schedule is as follows: 11th March – Johor Town along Khayaban-e-Firdousi, 18th March – Gulberg from Zahoor Elahi Rd to Hussain Chowk and 23rd March – Guinness World Record attempt at Punjab Stadium.