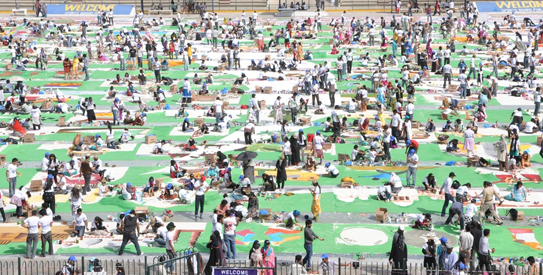 LAHORE: A group of 1,000 or so students of colleges and universities from all over Punjab on Friday made the world’s largest painting – 41,685 square feet – at the National Hockey Stadium.

It is learnt that the previous record of 33,000 square-foot painting had been acclaimed by the Guinness World Records.

According to the organisers, the world’s largest painting was accomplished in seven hours. A large number of people attended the festivity at the stadium.

Purple Art & Communications Director Public Relations Salma Turab told Dawn the pervious record of the largest painting was made in Nigeria in 2010 and Pakistan had broken it. She however said none of the Guinness World Records representatives came here.

She said the international procedure had been followed and the aerial view of the artwork and videos were sent to the authorities of the Guinness World Records and they had declared it a new record.

“According to the rules of GWR, an architect appointed for the job measures the painting,” she said.

The participants kept painting with great enthusiasm amid rainbow of colours in and around the venue. Some of the participants were seen wearing hair wigs and draped in the colours of Pakistani flag.

It was the culmination of the third Annual Street Art Competition which started on March 4 in Lahore. The event was an initiative by the Message Welfare Trust and supported by Master Paints and aptly titled “The Colors of Pakistan”, an effort to show the ‘softer side’ of the country to bring the youth together to send the globe a positive message of peace and solidarity with the global village.

The world record rekindled the national spirit and created awareness about different cultures and historical representation important to the social fabric of this nation. The event was also supported by the Punjab government.

The students who took part in the competition were quite excited. Sana, one of the participants, told Dawn: “To paint the largest painting of the world is a great experience. But everybody is feeling tired because the whole exercise took a great effort.”

Tariq Awan said the youth of Pakistan through this painting wanted to send the message of peace and love across the world.