LAHORE: Young people explored a range of cultural and social issues in paint-on-wall in a street art competition held across Gulberg on Sunday.

Cultural identities, the environment, education, historical monuments, dengue prevention and blood donations were some of the popular themes tackled by the street artists. Some addressed more complex issues.

Three UET students painted a mural with seven characters, wearing black and white suits, each symbolising a fundamental right that every citizen should be entitled to exercise freely.

“There’s freedom of religion, speech, association … those are a few,” said Samaaya Javed, an architecture student, as she labelled the figures painted on a wall along the footpath near the Cavalry Ground turning from Main Boulevard.

Many families took advantage of the free registration to participate in the event as a fun thing to do on a Sunday. Itral Gul, a former Kinnaird College student, came with her siblings.

“I received a text message from the Message Welfare Trust a few days ago. I had participated two years ago with my Kinnaird classmates and knew that it is great fun,” said Gul, as she and her brother painted a desert landscape of Balochistan. “I was good at painting landscapes and I decided to do something I was good at,” she said.

Most of the medical students painted images aimed at spreading awareness about dengue prevention or the importance of blood donations.

Seven King Edward students, who had earlier in the day helped students paint in Firdous Market, sketched two hands holding a halved heart. Dark shades were used to represent an electrocardiograph. “This signifies how a single blood donation can sometimes save a life,” said Mohammad Fahad, one of the artists.

“Most students are sticking to one cultural theme for their work, but we decided to do something with more of a national vibe,” she said. 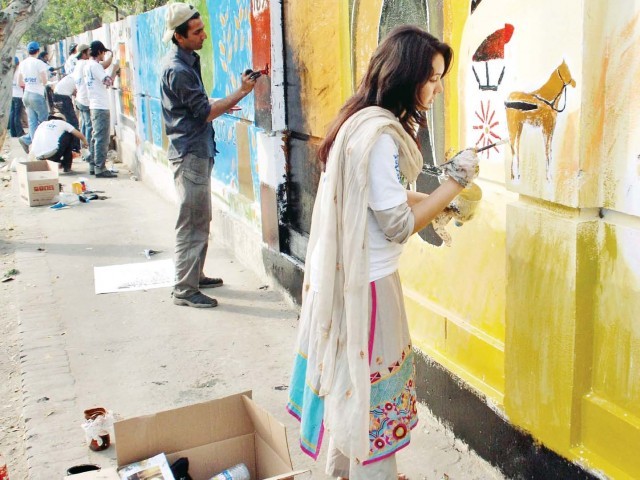 Hina, who runs an art institute in Gujranwala, came to Lahore with three students for the event. They painted the Government College University building and stencilled in images of Arfa Kareem, the IT prodigy whose death earlier this year left the nation saddened, at various ages across the mural.

“She was as bright a star as one can get in Pakistan’s schools and a powerful inspiration to many aspiring IT professionals,” said Hina. “I think she makes the mural contemporary and forceful.”

Two murals in particular were widely appreciated: a portrait of singer Abida Parveen painted by an NCA student, and a scene from the Shandoor Polo Festival by students of the Arts and Design Institute of Punjab University.

Mudassar Zia, the founder of Message Welfare Trust, the organisers of the event along with sponsor Master Paints, said 650 teams had registered for the even on Facebook. The organisers arranged transport for the registered participants across Gulberg. The participants included people from Gujrat, Gujranwala, Faisalabad and Sargodha, he said. The event started at 8am and ended at 5pm.

This was the third in a series of four street art events organised by the Message Welfare Trust and Master Paints. Murals were earlier painted on March 4 and March 11 at Egerton Road and Johar Town, respectively. On March 23, all registered participants will attempt a Guinness World Record for a 40,000 square feet painting at the Hockey Stadium. The name of the competition winners will also be announced then.

LAHORE – The annual street art competition currently in its 3rd year has initiated across the vibrant city of Lahore. An initiative by Message Welfare Trust and supported by Pakistan’s leading paint company Master Paints since 2011, this year’s competition has attracted a massive response with participation from over 400 teams from schools, universities and colleges all across Punjab, says a Press release.
Starting from the 4th of March, the series takes place every Sunday at different localities across Lahore till 23rd March, on Pakistan Day where the top 200 teams from the competition will be given a chance to make history and do Pakistan proud by attempting to set a new Guinness World Record for the ‘largest painting’ in one day ever achieved. The organizers will be looking to fill a canvas size of approximately 40,000 square feet on the day based on the theme of Pakistan, its culture and its youth.
Speaking from Abbott & Edgerton Road on Sunday (March 4) where the first series took place, Master Paints CFO, Kashif Shahzad said, “For majority, the “Street Art Competition” is an anti wall chalking campaign that teaches people to keep the city walls clean. For us at Master Paints, it’s a vision for a better future!”
Currently the Guinness World Record for largest painting set on 17th November 2010 at Lagos State, Nigeria measures at 33,696 square feet approximately.
Praising the effort by Message Welfare Trust, Master Paints CEO, Sufi Mohammad Amin said, “We have always believed in giving back to our community which is why we support initiatives such as “Street Art Competition”, and what better way to send a positive message to the world on Pakistan Day than making an attempt to set a new Guinness World Record. We will be telecasting the event live on our official facebook page.”
President of Message Welfare Trust (MWT), Mudassar Zia said, “A picture says a thousand words, and we really appreciate our sponsors, Master Paints.”
The Street Art Competition 2012 schedule is as follows: 11th March – Johor Town along Khayaban-e-Firdousi, 18th March – Gulberg from Zahoor Elahi Rd to Hussain Chowk and 23rd March – Guinness World Record attempt at Punjab Stadium.

“A local record was set by painting a 976-feet wall in Dharampura on March 6,” said Mudassir Zia, one of the organisers of the Street Art Competition, a campaign against ugly wall chalking, organised by the Message Welfare Trust and Master Paints. It ended this week.

Talking to The Express Tribune, Zia said that the painters had wanted to go for a world record, but that was not possible this year. He hoped to attempt that next year.

Zia said that it was the second year the painting competition had been organised. Last year, he said, students from Punjab University won the first prize.

“We have had more students this year, showing the competition has gained popularity among students,” he said.

Since March 6, around 1,220 participants in the campaign have been coming together every Sunday to paint 250 walls around the city.

Three weeks on, these walls have images of our cultural and architectural heritage and peace messages.

Over 75 institutions from within the city along with four teams each from Gujrat, Gujranwala, Faisalabad and Islamabad participated in the competition.

The painters were given themes such as culture, monuments, education, peace, gates of Lahore and truck art.

Muhammad Nazim, another organiser, said that the campaign had two equally important motives, improving the city’s looks and involving students in constructive activity.

“Wall chalking give a negative impression about the city. We wanted to do away with nasty inscriptions on the walls that make the city look grimy,” he said.

The prize distribution ceremony is scheduled for April 10, where the best painter will be awarded Rs25,000.

Aslam Chaudhry, one of the spectators, said that watching the students paint the walls had been fun for a number of people like him. Though it involved hard work, he said, the paintings failed to convey a message and looked messy from a distance. For commuters to be able to appreciate them, the paintings should be larger, he added.

More than 300 school students participated in the second edition of the street art competition held on Sunday. Students painted walls in Dharampura and Garhi Shahu areas. The themes were assigned by the organisers.

Wasif Hussain, one of the participants, said the event was meant to beautify the city. He said while most people decorated their homes, they generally paid no attention to public spaces which were equally important.

Sarah Jameel, a Beaconhouse National University student, said one of the benefits of painting the walls the removal of chalking done by political and religious parties. She said after all four zones were covered, the people would have something pleasant to look at.

She said the event was also a good community-building exercise. The participants, she said, were getting a great chance to interact with the people who lived in the areas.

The city has been divided into four zones for the purpose of this competition. On Sunday, participants painted walls in zone 1 (including Dharampura and Garhi Shahu areas). Students from National College of Arts, BNU, FAST, Lahore Grammar School and LACAS are participating in the activity. The themes for this week included truck art, education, peace and freedom, culture, gates of Lahore and historical monuments.

Next week, the participants will paint walls in Garden Town, Model Town and Faisal Towm (Zone 2).